“What to do, Kathmandu?”

My guide smiled at me over our steaming bowls of vegetable soup. He’d shown me around Kathmandu’s famous Durbar Square and shrugged as if the question encompassed all we’d spoken about. His struggles to make ends meet. His conversion to Christianity. His attempts to be an honest guide in the midst of touts and scammers.

I smiled back and looked at the buildings around us. We were sitting in a rooftop café by the Square, looking at the intricately carved wooden structures and the remains of ancient buildings destroyed by the earthquake that shook the Kathmandu Valley in April 2015.

I wanted to know what Kathmandu would do. What anyone could do in the face of such odds.

There I was, buying cappuccinos from rooftop cafes in a city where some families lived in houses with dirt floors, their buildings still crumbling post-earthquake. Watching other foreigners stocking up on hiking gear in the many shops in Thamel, the backpackers’ quarter, getting ready for their treks across mountains where they could hire local guides and porters for cheap and get their postcard-perfect photos for their Christmas cards. Stocking up on the stories they would tell, their tone slightly patronizing (even though they didn’t mean to be)—that time they went to the Himalayas. How nice the local people were. How they seemed so happy even though they had so little.

And yet, tourism is one of the biggest contributors to Nepal’s economy. Was it not in everyone’s best interest for me to hop on a tour and hire a porter and let the money flow out of my pockets?

When I’d read up on Nepal in various guidebooks and on travel websites, it had seemed like a traveler’s dream, with history lining the streets and nature calling from its borders.

But, to be honest, Nepal didn’t woo me as it has other tourists. Of course, this is neither Nepal’s fault nor its responsibility. At the same time, I didn’t do the things that most tourists (or voluntourists) do who sing Nepal’s praises.

I didn’t go trekking. I didn’t go paragliding in Pokhara like you’re supposed to. I didn’t even go to the 10-day silent retreat I’d applied for in Lumbini (the birthplace of Buddha!) because they were full.

But I also felt strange spending hundreds of dollars to go trekking or paragliding when I knew the vast majority of the population couldn’t do the same. What kind of world is that where much of a country struggles to get by while these (mostly white) tourists stream in dropping loads of cash on things that are “fun”?

To say I struggled is an understatement.

I also recognized that after a month of almost constant travel in India, I was beginning to hit a tourism wall.

I knew that if travel was to be my life for at least a year, I wouldn’t be able to be a tourist the whole time. That I would need to live in a different way. I needed to live.

And still, I was there to experience! To see new things! To dig into new cultures!

I wandered the streets of Kathmandu, eyeing the intricate architecture of the buildings that had survived, hiking up to Swayambhunath Temple, looking down across the cloud of dust and smog that covered the city, smiling at the children flying kites for the holiday, families celebrating on the unfinished floors of their still-rebuilding houses. 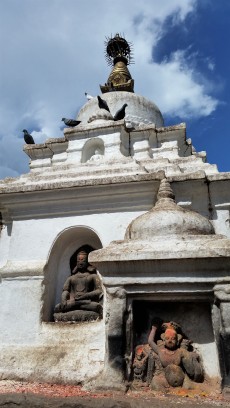 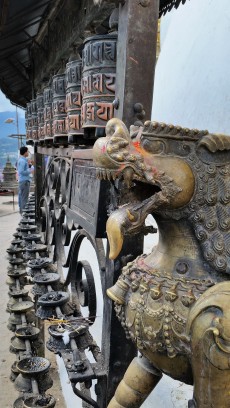 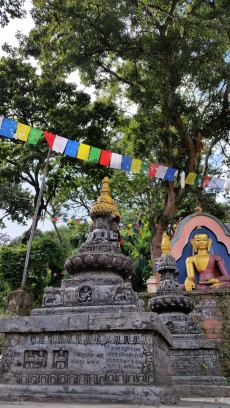 But in the meantime, I felt myself falling into a kind of paralysis. Unable to reconcile myself with that space. Intending to write but struggling to do so. Fearing touts and scammers everywhere, especially after I’d gotten scammed twice in India and Nepal. Immobilized by my perfectionism, my wanting to get things right—cultural norms, language. Feeling instead like I was failing. Old feelings, old habits that even half a world away still haunted me.

And at night, I curled up in my hotel room and played Civ IV until I felt like I had control over something. Because out there was chaos. As was my life. 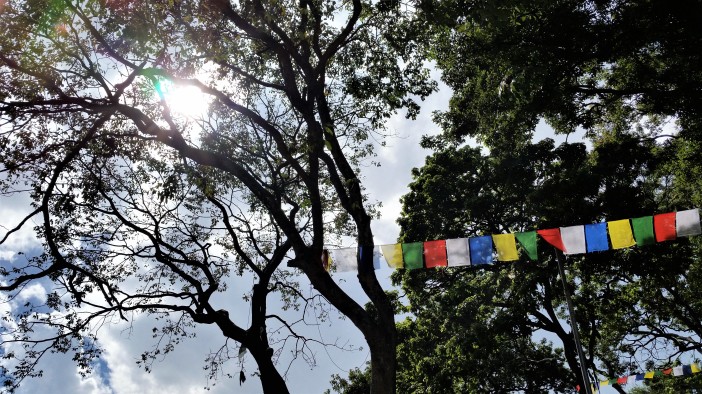 There were bright spots in my Kathmandu life, of course. My tour guide in Durbar Square who was kind and friendly and seemed genuinely happy to meet another Christian and who told me how his faith helped rescue him from despair. Who invited me to come to church with him if I was still in Kathmandu for a weekend service.

The owners of the hotel where I stayed in Thamel (the backpacker quarter in Kathmandu) who shared with me their experience in the earthquake and how, for a long time, after weeks of living outside in tents in safe, open areas, they couldn’t go to the top floor of their hotel because they were too traumatized. And who later shared vodka and snacks with me and a few other guests in the lobby to celebrate Dashain, the nation’s biggest holiday. Their kind greetings as I came and went and their son teaching his little brother the English alphabet in the lobby in the mornings.

Getting my fortune read by Pashupatinath Temple, one of the oldest and most important Hindu temples in Kathmandu. The fortuneteller tying a bundle of red threads around my wrist—threads still there, months later—blessing me with the words “God have mercy” in both Nepali and English. (By the way, I’m going to live until I’m 81 and have already met the person I’m going to marry and am going to be very successful in the marketing profession.)

Having a delicious vegetarian dinner with a new feminist friend, drinking a “Hurricane” at a place called New Orleans Café, and talking late into the night about everything from Irish politics (her home) and American politics to reproductive rights to the queer scene in Nepal. Talking until we shut the place down.

But Kathmandu was hard, too. People seemed friendlier on the face of things than I experienced in India—in small things, like smiling and greeting me when I went to a restaurant. Still, I couldn’t help but feel an undercurrent of something else.

“This place was burning for days after the earthquake,” another guide I met said of the pyres for cremation that lined the river by Pashupatinath Temple. We saw a cremation while I was there—a somber, quiet moment, the smoke rising, the last remains of the bones and ash being pushed into the dark water. “Thousands of people were cremated here.”

Did that cloud still hang over the city? Or was it a cloud I brought with me—one of guilt at having the privilege to sell all my things and travel?

The privilege that selling my things added up to enough to buy me even a plane ticket?

In the midst of that, I found my way to gardens and temples and other spaces that I knew would help center me. Still, I knew I couldn’t stay, but I didn’t know where to go.

What my body and heart were calling me to do was to stop and listen. To be still after learning so much about stillness. About destruction and rebirth. About the blessing of a single moment.

I stayed for a week in Kathmandu, preparing to make my way toward Lumbini, where I’d registered for that silent retreat. But when they e-mailed to say that there was no space for me, I made a plan B. With my hotel owner’s help, I booked a bus ticket to Pokhara, a quiet lakeside city toward the central-west of the country nestled at the foot of the Himalayan Mountains. And I booked an Airbnb that promised to give me two weeks’ worth of the quiet I so longed for.

The morning I left Kathmandu, I ate the hotel’s delicious homemade breakfast and sweet, hot chai. And I scrambled after my host as he led me to the place where the bus would pick me up.

The dust kicked up into the sky as cars and motorbikes drove past, their engines roaring around me and honking coming from all sides. We waited. A big green bus pulled over. I threw my pack in the back.

The kind eyes of the hotel owner looked after me as the bus trundled on to Pokhara.