After going solo for a few days in Agra (and a solid 24 hours in Delhi), I hit a hard reset and joined a tour group (with Intrepid Travel, which came highly recommended by Nomadic Matt, one of the writers/bloggers who made this round-the-world journey seem infinitely more possible than I initially imagined).

I must say, I had (and still have) mixed feelings about tour groups. For one, I feel it sets a traveler off from the rest of a country and its people in a little, protected bubble. You get tons of stuff taken care of for you, which can be nice, but it comes at the expense of one’s independence—for example, not being able to stay an extra day or two here or taking a side trip there. At the same time, I feel like a traveler can get so much more information about a place or city than when they’re going it alone, when one might only guess what those sculptures above the door mean or why the shopkeepers hang red pepper and lime outside their doors (a thing I actually wouldn’t have noticed without this tour). When I’m solo, I’m so fixated on staying safe, getting from point A to point B, and making all the decisions, I don’t always get the chance to notice things. So, in that regard, a tour can make all the difference.

Anyway, the list goes on—both pros and cons—but I’d have to say, I had a wonderful experience with Intrepid. I joined largely because before I left, I’d read so many travel warnings for solo female travelers I was concerned about going it alone in India. I think I’d be more confident now, but part of that is because I had this great intro to the northern part of India thanks to this tour (and our wonderful tour leader).

So with that in mind, let’s delve into Delhi.

The tour met up at our hotel and began with a walk through Old Delhi, where we took in the culture of the marketplace, tried some street food, got lost a couple times, walked down an alley of stores that sold detailing for saris, and marveled at the mishmash of Old Delhi architecture.

Eventually, we wound up at one of the oldest mosques in India, Jama Masjid. The mosque was quite grand, but peaceful, too, with a wide-angle view of the city below. 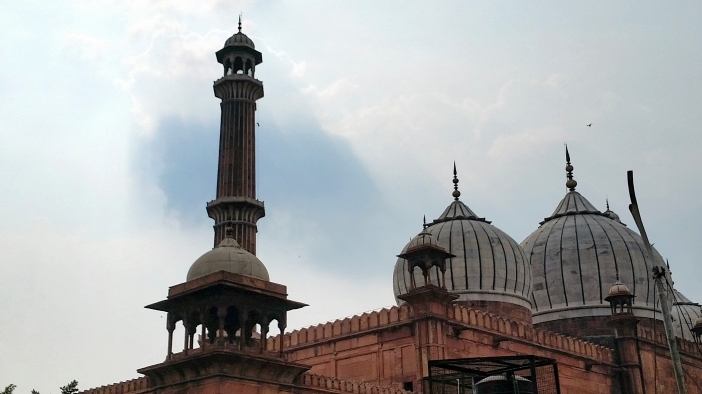 We then took autorickshaws and cycle rickshaws to a few other sights that Delhi had to offer. First, we went to the Gurudwara Sheeshganj/Sis Ganj (a Sikh temple), the first I’d ever been to, where words from their holy book were piped over speakers and worshippers could come and sit, heads covered, for a while. We washed our hands and feet with cool water before stepping in, and later, we took a tour of the kitchen and dining hall, which provide meals after each service (to all people—worshippers, the hungry, local folks—it’s a pretty amazing operation, all staffed by volunteers). In fact, all Sikh temples do this, and it made me think how different our world would be if all faiths fed everyone. For Sikhs, this is a great equalizer—breaking bread with others, no matter status or caste or class. And I imagine it would be that and more, if everyone shared what they had.

After that, we took cycle rickshaws to Khari Baoli, Asia’s biggest wholesale spice market, where the smells of pepper and cardamom swam through the air, where at each turn a new scent came my way. Barrels full of the stuff, and colors and sound everywhere. The honking of motorbikes and autorickshaws. The crowds gathered at certain vendors’ storefronts. The dried red peppers that reminded me of Korea, where gochu (a Korean red pepper) flavors so many dishes. 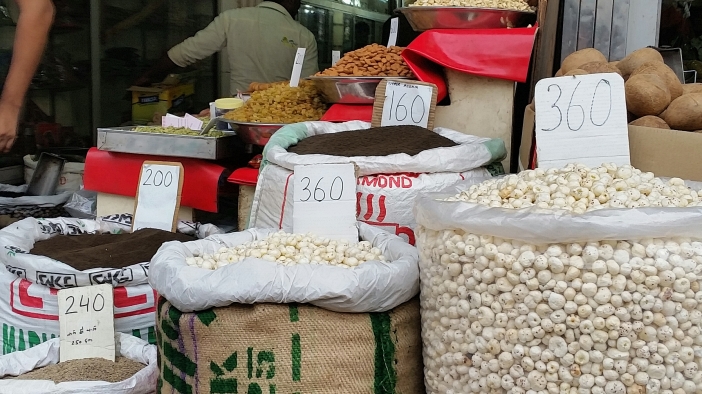 Finally, my senses filled, we headed back to the hotel via the metro, still taking in the sights of the overflowing marketplaces and Hindu temples along the way. 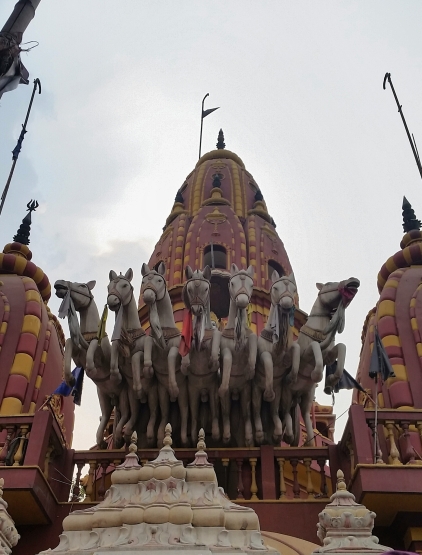 One thought on “Beginning Anew in New Delhi”