Written a few days ago, in a small notebook, on a quiet bench underneath the trees. (Post dated to match when it was written.)

I’m sitting inside a Buddhist temple in Japan, listening to the rain fall through the leaves. We thought about skipping the temple today because of the weather but decided it might be quieter if we went in the rain anyway–so we bought umbrellas at a Family Mart (one of the many convenience stores that dot both Japan and Korea) and finagled some train tickets and headed out from the station to a small town about 20 or 30 minutes outside of Fukuoka.

I’ve been really grateful for Keyes’ skills during this part of the trip–they doubt their Japanese skills sometimes, but so far, they’ve been great. I also hope that this quiet time at the temple can help my inner introvert recharge. I’ve never traveled this long with someone, and while Keyes has humored my changes in temperament, I fear I’ve gotten a shorter and shorter fuse with them–and I realize it’s probably because I haven’t taken much alone time (even though they’ve offered it). (Note to self for future travels: If traveling with friends and loved ones, build in some solo time every few days.) Keyes has been patient with me, though, which I appreciate. Just trying to return the kindness by working my way back to being kind.

So here we are. Just outside of Fukuoka, the sound of the train rumbling by and disappearing. Rain on leaves, slipping into streams that flow down the mountain. Perhaps the first actual quiet we’ve since we stood on Vargas Plateau in California. Quiet. And present. And here. 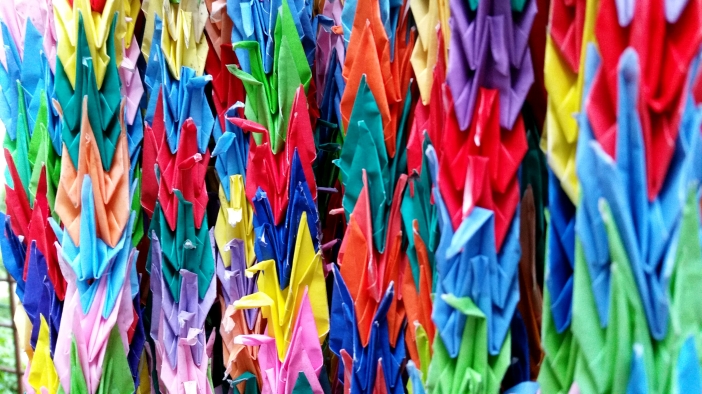 And yet, part of the reason I need this here-ness is because my thoughts have been both in the past and on the future.

Yesterday, we went to the Nagasaki Atomic Bomb Museum and Peace Park. The museum is incredible, as is the city, but it was hard to bear witness to the destruction caused by war, caused by the leaders of my country. The remnants of the blast–wire melted together, grandfather clocks and watches stopped at 11:02 (the exact time the bomb hit), buildings decimated, shadows of people burned onto walls–all that was left. Bodies shredded by the fire and heat of the blast, and then by the debris hurled at them.

(For more on what the victims–mostly civilians–in Nagasaki suffered and the movement for peace that the city now sustains, see the link above. I have a hard time capturing it here, and felt out of place photographing a lot of things, so you can find survivors’ accounts, historical records, and other resources on the museum website.)

When I visited the House of Sharing in South Korea, which has a museum about the Korean “comfort women” (who were forced into systematized institution of sexual slavery by the Japanese forces/government), we talked about how these women and the Japanese soldiers who made use of this system were both stuck in the cruel and terrible machine of war–how, with time, many of the “comfort women” and their advocates didn’t blame the Japanese soldiers for what happened but blamed both those in power who created/condoned it–and war itself.

I was reminded of that at the Nagasaki Atomic Bomb Museum–though I want to be careful to not simply ease my own American conscience and consciousness by throwing my hands up and chalking up this–and other violences–to the cruelties and inhumanity of war. Indeed, I think it is important for our country to take responsibility for and learn from the atrocities we committed against civilian life (and the country as a whole). And the irresponsibility and inhumanity of unleashing such force on anyone or anything.

But I don’t think we’ve learned–about peace or the sacredness of life. Imagine if this had happened to us–on American soil, a soil that became forever changed, down to its basic structure, because of radiation. Over 75,000 lives lost in the blast and 75,000 more injured in Nagasaki alone, a city of 240,000 people at the time. The health systems that could’ve helped the injured decimated. Children cremating their baby siblings, crying for their parents, or simply disappeared.

Because of this, I feel compelled to broaden the conversation beyond America’s (and other nations’) historical mistakes. I don’t feel like we can make the moves necessary to prevent violence (from killings on this large of a scale to the interpersonal and sexual violence that’s happening next door that our culture repeatedly fails to pay attention to) unless we broaden the dialogue to one about grievability and “otherness.”

Judith Butler, a gender theorist and philosopher, asks in many of her newer works this very important question: Whose lives count as lives? Whose life is a grievable? And whose are just numbers?

Why are some deaths labeled “tragedies,” with headlines and smiling photos of the dead on the hour during the 24-hour news cycle? And why are others simply “collateral damage” or reported as “militants” when they had nothing to do with terrorism at all?

A few thousand Americans died when the planes struck on 9/11. Their lives we grieve–as we should. But why do we not also grieve the civilians killed in the wars we’ve continued to wage throughout the Middle East (and beyond, sometimes) for all of my adulthood? Have we not learned our lesson? Or is it even possible for us to do so in a country that was founded on the genocide of those who lived on the North American continent long before the “Founding Fathers” set about making the U.S. into a nation? A country whose economic foundations and literal infrastructure were built via the systematic enslavement and devaluation of–and, subsequently, the brutal socio-cultural and physical violence toward–a whole race of human beings?

I don’t know if I have the answers to these questions. But as I was filled with more and more grief for those lives lost by the U.S. dropping two atomic bombs on the cities of Hiroshima and Nagasaki–the latter of which had few military ties, an POW camp full of Allied troops, and one of the most vibrant Christian populations in the country–I couldn’t help but find my mind spinning toward these questions.

I don’t know. But I do believe we must turn inward first. We must mourn and grieve and love and center ourselves in humility. We must listen and hear. We must take responsibility. We must grieve. We must make space for others’ voices and stories. Sometimes, we need to speak our truths and our stories–especially if they are the ones our culture so often refuses to hear. But we must always love.

For now, there are few answers other answers that I can come to. But perhaps, after all that I’ve seen during the last day, this isn’t a time for answers–and certainly not easy ones. I think what I need is to allow myself to feel this grief and ask this place for forgiveness for what my country has done. To ask this world or God for forgiveness for the pain and violence we humans continue to inflict upon one another. And to ask that I can be a part of making this world different–to be a channel of peace and love where there is strife and hate.

To be honest, I’ve maybe not been very loving the past few days, and I’m glad that Keyes seems to have forgiven me for that. As I watch the rain fall and let these many thoughts and feelings circulate through my head, I hope I can cultivate some of that love and peace in my own heart as we continue our time in Japan. 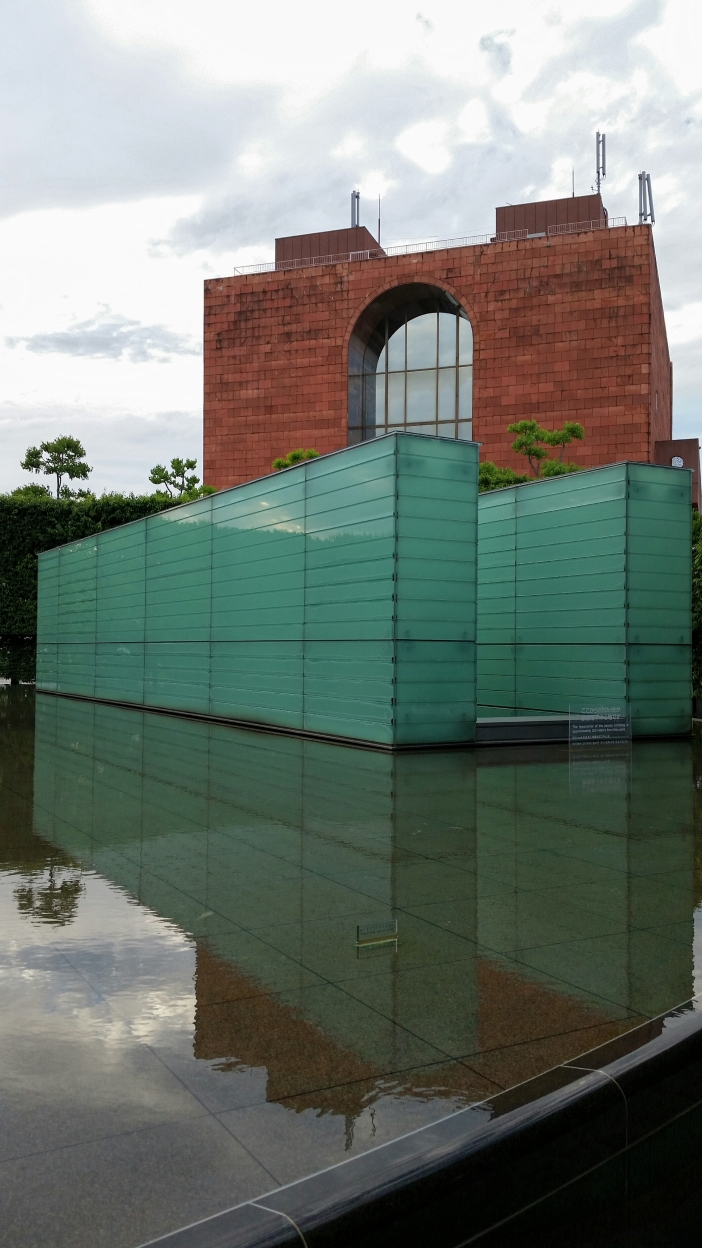 Memorial to the victims of the atomic bomb dropped on Nagasaki

4 thoughts on “A Channel of Peace”